Larger than life ESPN analyst and NBA-hall-of-famer Bill Walton visited the U campus on Jan. 4 to highlight the U’s sustainability initiatives. Taking the time to visit with members from the Sustainability Office, Walton learned what sets the U apart from its athletic and academic peers.

Walton toured the U’s newest solar arrays located across three locations in Research Park. The installations, at the 729 Arapeen, 383 Colorow and 295 Chipeta facilities include multiple mounting configurations: rooftop, parking canopy and ground. These new solar arrays are a combined 1.9-megawatts in size and will offset the three buildings energy consumption by a combined 27 percent and contributes to the U’s goal of carbon neutrality by 2050. 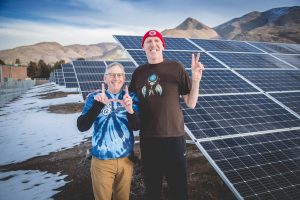 “As a fan of Utah Basketball and season ticket holder, having Bill highlight our initiatives on the ESPN broadcast is very exciting,” said Deputy Chief Sustainability Officer Myron Willson. “It was thrilling to show him our new solar projects, the Edible Campus Garden Hoophouse and some of the LEED certified buildings we have on campus. And it’s inspiring to watch a man with a national audience, show his passion for sustainable practices. He’s also an avid cyclist and promotes an active and healthy lifestyle.”

If you were lucky enough to have been there that brisk January morning, you would have met a man who took the time to learn everyone’s name and was a gracious guest on campus. His professionalism showed through as he stood on the Bonneville Shoreline Trail, overlooking the campus and taped his segments that would air later that evening in his segment called “Walton’s World.” He often only needed one take. Which was good, as he had removed his puffy protective coat for each take.

Walton, since joining the Pac-12 network, has used his fame to shed light on many sustainability issues. When he travels to different colleges and universities, he seeks out stories that help preserve, “our mother earth” as he puts it. He became a “tree hugger” when visiting the University of Oregon campus.

Walton will be returning to the U campus in February and plans on further highlighting the U’s initiatives. And we can’t wait to show him some of the great research being done by our faculty and students.

The University of Utah Research Park has activated several new solar arrays across three locations. The installations, at the 729 Arapeen, 383 Colorow and 295 Chipeta facilities include multiple mounting configurations (rooftop, parking canopy and ground).

By the Numbers infographic.
PHOTO CREDIT: University of Utah

By the Numbers infographic. 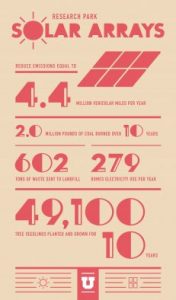 These new solar arrays are a combined 1.9-megawatts in size and will offset the three buildings energy consumption by a combined 27 percent and contributes to the U’s goal of carbon neutrality by 2050.

“We are excited about the opportunity to significantly expand our alternative energy sources in Research Park,” said Jonathon Bates, Real Estate Administration executive director. “These projects not only align with the U’s commitment to be carbon neutral by 2050, but also begin the process of reinforcing sustainable building practices in Research Park on the cusp of its 50th birthday. As we look to the next 50 years of economic growth, innovation and private-public partnerships to reinforce the foundation of Research Park; it is exciting to capitalize on an opportunity to strengthen our alignment to sustainable development practices.”

Last year, solar energy was reported as the world’s fastest-growing source of power. In Salt Lake City alone, it’s been growing at a rapid pace, with an estimated 60,000 panels installed. The new university facilities are projected to save about 1.6 tons of carbon dioxide a year and represent a combined effort with local contractor EFG Consulting, the U, and Celtic Bank to increase the renewable energy sources in Salt Lake City.

Emissions offset by the numbers:

4 million vehicular miles per year
2 million pounds of coal burned over 10 years
49,100 tree seedlings grown for 10 years
602 tons of waste sent to landfill
279 homes electricity use per year
1,795 acres of U.S. forest in one year
“We are very interested in expanding our renewable footprint at the university. Projects like these, which can supply a whopping 1.9 MW of power, are much more than token gestures,” said University of Utah Chief Sustainability Officer Amy Wildermuth. “They diversify our energy supply and are visible reminders of our commitment to better air quality and carbon neutrality. To do this at no increased cost to the university and without using taxpayer funds is truly a remarkable accomplishment. I applaud Jonathon and his partners at Celtic Bank for their ingenuity in bringing this project to fruition and hope we are able to capitalize on more opportunities like this in the future.” 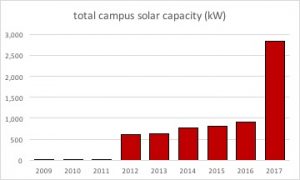 These arrays in Research Park will nearly triple the total amount of solar energy produced on campus. Over the last eight years, on-campus energy production by solar projects has continued to increase. Notable projects include the 2012 installation of solar panels atop the Natural History Museum of Utah, HPER East and HPER North. In 2013, rooftop solar panels on DESB came on line. The Marriott Library panels were installed in 2014 and 15, and most recently in 2016, the S.J. Quinney Law solar patio and parking canopy opened. As illustrated in the graph, each of these projects has helped to increase the campus’ total solar capacity.

The solar arrays at 383 Colorow and 729 Arapeen were made possible through a partnership with Celtic Bank, which provided tax equity, permanent debt and construction funding for this project. This allowed the U to complete this project with zero out-of-pocket costs and no taxpayer capital at risk. Celtic Bank will own and maintain the arrays for the duration of the project, and will charge the U a discounted rate for the kilowatts produced. After 20 years, the ownership transfers to the U.

The Williams Building property in the University of Utah’s Research Park offers a unique opportunity to host a demonstration project for the Red Butte Creek Strategic Vision. In partnership with the Office of Sustainability, the Global Change and Sustainability Center, campus facilities and planning, and the Real Estate Administration, the CEPD has convened a collaborative design process to re-create the landscape of the Williams Building property. Led by a landscape architecture consultant, the research design team has worked to weave ecological and social-impact research questions into the new landscaping process so that the University can benefit from an ongoing investigative and learning relationship with this piece of land. The project will restore native ecological diversity and function to this portion of the Red Butte Creek watershed; increase access to recreational space for occupants of the building, the campus community, and the public; and test research questions about urban stream restoration, urban runoff management, hydrology, use of public space, and more.

This project is funded with support from the Real Estate Administration for the University of Utah Research Park.